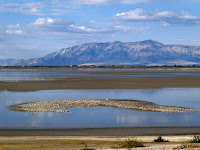 This morning my attention was grabbed by a BBC video titled Utah’s Great Salt Lake is Running Out of Water. It’s a fascinating video about the conditions that have contributed to the Great Salt Lake shrinking by nearly two-thirds in this century. Spoiler alert: drought isn’t the biggest contributor to the shrinkage.

Watching the BBC’s video about Great Salt Lake prompted me to do a little searching for more information about the lake and its ecosystem. That search led me to a few things worth sharing with students.