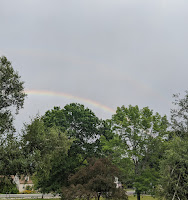 My daughters love rainbows. They have rainbow dresses, rainbow bracelets, rainbow stickers, and anything else that can have a rainbow on it. So they were super excited last week when we saw a double rainbow from our front porch! (You can look on my Instagram for better pictures of it than the one in this post). Their excitement and later questions about how rainbows are made prompted this post. If you have children in your life who are curious about how rainbows are made, the following two videos are for you.

How to Make a Rainbow is a SciShow Kids video that I featured when it was released about six years ago. The video gives directions for a little activity in which kids can make rainbows appear on white paper by properly positioning a glass of water in front of ray of sunlight. The video then goes on to explain what makes rainbows appear outside.